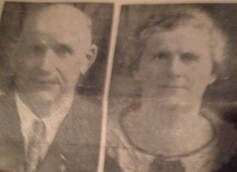 Patrick and Mary Ann George Diskin (Shared by Gary Dowling)
Mike Diskin (1814-1903) and Mary Kellough Diskin (1816-1882) immigrated from Ireland in 1857, or perhaps a few years earlier.  They arrived in Kansas in 1871 and purchased a farm in Grant Township, Crawford County some four miles east of Osage Mission where they farmed and raised their seven children [2].  From their children's birth locations, one can imagine the adventures the Diskins experienced as they made their way from Ireland to Osage Mission:
Diskin Family Religious Vocations:
We have found religious vocations related to several of the window donor families.  The Diskins are certainly among them.  The Diskin family has been blessed, over the years, to have five women enter the convent.  Two of them are still with the Sisters of Mercy:Who's Behind the Window? includes more information about these women including photos.
The George family roots at Osage Mission:
The Patriarch of the local George family was Nicholas Amos George II (1809-1887).  Nicholas arrived in America in 1837 from his native village of Fouches in the European Kingdom of Belgium.  Nicholas initially settled southeast of Buffalo, New York and in 1939 he married Catherine Goffine who had arrived from Belgium in 1835.  They raised a family of five sons and four daughters.  In 1871 parents Nicholas and Catherine moved to Osage Mission where five of their children had already moved.  They homesteaded a farm in Mission Township of Neosho County.

But, Who are L & M George?  According to the St. Paul Journal article dated February 1, 1900, the George donors are Leopold and Martha, which were siblings of Mary Ann George Diskin, children of Nicholas and Johanna George.

Remember what was said above about 'very simple or very complex?'   Actually the Who's Behind the Window manuscript includes about twenty pages about the Diskin - George families that break the family relationships down pretty simply.   These are two large families and there is a lot of detail about names, occupations, lives, deaths, etc.