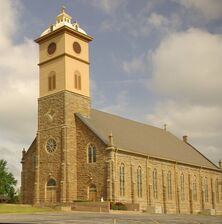 ​ The Basement Chapel
Recent activity beneath St. Francis de Hieronymo Catholic Church in St. Paul has stirred memories of an old basement chapel.  The chapel is gone, but during its sixty year life it served our church and community well.  It and surrounding rooms were easier to heat during winter, it was called to service during the historic re-internment of our missionary nuns, and it served catechism teachers and students each morning after Mass.  But it disappeared for the same reason it was created.  Those of us with grey hair around our ears remember it well. 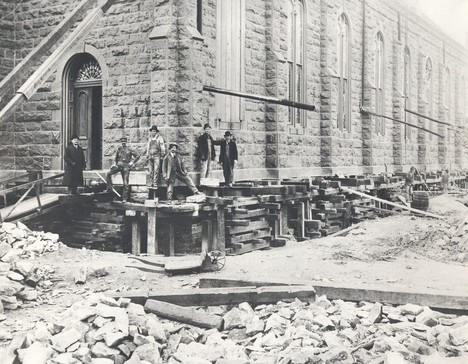 In 1909 the church was raised four feet and a basement foundation was installed. Much of the work was done by local men under the supervision of Grant Renne engineers.
The Chapel's Origin and Use.
When the stone church was dedicated in May of 1884 it did not have a basement and it sat much closer to the ground.   During the early 1900’s the building was experiencing structural problems due to settling.   In 1909 the Grant Renne Company of Kansas City was hired to repair the foundation.  They raised the entire church and tower four feet and built a new basement foundation.  In November of 1910 the St. Paul Journal reported that an altar had been placed in the new basement chapel.

​The chapel was centered, north to south, in the new basement and occupied about 1/3 of the floor space.  Upon descending an external stairway, near the southeast corner of the building, you entered a foyer.  Turning right you passed through doors into the chapel.  The foyer also included doors into the parish offices, a large meeting room and storage.  The north end of the basement included additional meeting and storage areas.  Near the northwest corner was the altar server’s dressing area with an interior staircase leading to the upstairs sacristy.  A narrow hall allowed passage behind the altar.  The chapel could be used during the winter to reduce the cost of heating the upstairs; but could not accommodate the large weekend Masses. 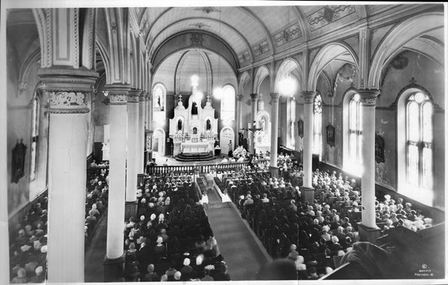 Reinterment Mass for the pioneer Sisters of Loretto. Note the small caskets along the aisle and in behind the Communion rail—and the single large casket.
Reinterment of the Pioneer Sisters of Loretto. [2]
The Sisters of Loretto served the Catholic Osage Mission and our town from 1847 to 1896.  During that time seventeen of their members passed and were buried in a small cemetery plot on the old St. Ann’s grounds.  By the late 1920’s the Passionists decided that the graves of the sisters, who had dedicated their lives to the Mission and the first women’s academy in Kansas, deserved more honor.  It was decided to disinter the bodies and move them to a plot in the parish cemetery.

In 1930 the remains of the Mission Lorettos were carefully dug up by men of the parish, identified and transferred into separate caskets.  The first sister had been buried in 1867 and the last in 1895.  Little remained of their caskets and bodies except: bones, habit shreds, crucifixes, rusted coffin handles and the red scapulars from the front of habits—with one exception.  The skeletal remains of Mother Bridget Hayden were in remarkable condition.  While her casket was deteriorated, her bones were in perfect position and her habit was fully preserved.  Local settlers shrugged and said “See, we told you she was a saint!”

​Disinterred remains were removed to the basement chapel where they laid in repose for two weeks.  During that period people traveled for miles to pay respects to the pioneer nuns.  Then, on Monday, September 15, 1930, the remains were moved to the first floor of the church for the reinterment Mass.  The church was full to capacity.  The crowd was awe-stricken at the sight of sixteen small black coffins lined up on either side of a full sized coffin.  The Fourth Degree Knights of Columbus entered from side aisles and assumed positions at the front of the church for the service.  The Mass was celebrated by Reverend John Fox and a group of co-celebrants.  After Mass, a procession stretched from the church to the cemetery as more than 1,000 people followed clergy, sixteen men carrying baby coffins on their shoulders and pallbearers carrying a single large coffin.

Masses, Religion Classes and Culinary Aroma.
Some of us remember when we went to Mass before school.  Students would walk into church carrying their books and a brown paper bag.  Prior to 1964 the Church required fasting from midnight in order to receive Holy Communion and the bags contained breakfast.  Everyone … everyone … carried a bag.   Under the careful scrutiny of the sisters and clergy, being the single occupant of the student pews, during Communion, was generally considered to be a bad idea.
​
After Mass, groups were dispersed throughout the church for morning Catechism Classes and the basement chapel and side rooms would accommodate several groups.  Having Catechism in the low-ceiling, smaller spaces of the basement was always more enjoyable—it boosted appetites.  When the brown paper bags opened and the wax paper was torn loose, the entire space filled with the aroma of fried eggs, onions, and mustard.  On a good morning someone had bacon too.

It Ended for the Same Reason it Started.
In the 1970’s the old problem reappeared.  A large crack appeared near the northeast corner of the church and attempts to repair it were unsuccessful.   The church was closed and in 1974 the Grant Renee Company was brought back to stabilize the building by installing 34 piers down to bedrock.  Then, in 1976, Laforge and Budd of Parsons completed stabilization and did a complete renovation.  Heating and cooling systems were modernized, stained glass windows were restored, wiring and plumbing was updated, plaster was repaired, and the sound system was upgraded. The entire church was renewed to a new level of beauty and safety.    On April 3, of 1977 the parish celebrated a Mass of Thanksgiving for the reopening of the church.

The basement chapel did not survive the renovation.  Large ductwork for modern heat pumps filled much of the basement including the old south rooms and offices.  Ducts also lowered headroom in other areas making ceiling installation impractical.  After the enormous fundraising efforts and costs related to restoration, rebuilding the basement chapel was not feasible.  But one very visible reminder of the chapel does remain.  Its altar was renovated and is now the front altar in the upstairs sanctuary. 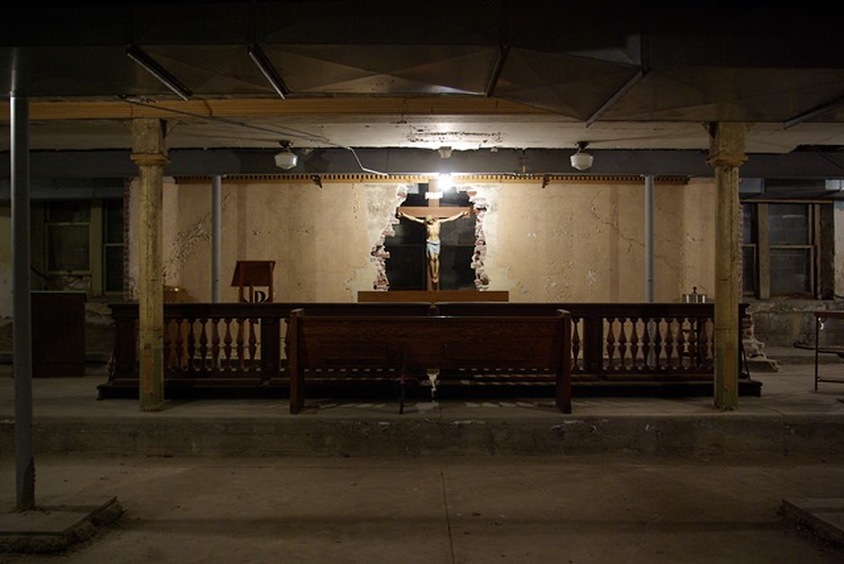 A Recent Basement Cleanup.
After the chapel closed the basement became a storage area.  Things were stored there—many forgotten.  By early 2015 the space was stacked with items no one had seen in years.  It was then that church workers Larry Coomes and Charlie Brown began a major cleanup.  The good was separated from junk and junk was discarded.  But as sifting progressed, they discovered artifacts from our history.  Also, as a broken plaster and brick wall reappeared, the men saw potential to place several objects in a special place—the original altar space.  Their arrangement is simple and artistic.  Not all of the items in the photos are original to the basement chapel; but they do bring back memories of St. Francis de Hieronymo Catholic Church’s long history.
Some Reference Information.
1. This article was written for the Southeast Kansas Catholics Facebook Page in January of 2016.  It was slightly modified for use here.  Much of the information was taken from the St. Francis Catholic Church Sesquicentennial book.

2. Details regarding the reinterment of the Sisters of Loretto were also taken from Life and Times of Mother Bridget by W. W. Graves, 1938.  For more information about the reinterment follow THIS LINK.