Hope, like St. Francis Cemetery, is still active and well maintained.  It also contains the graves of many settlers, Civil War veterans and prominent people.  Two stories, related to markers within Hope, are relayed here because they talk about the times; and they point out that Osage Mission was indeed a frontier town. 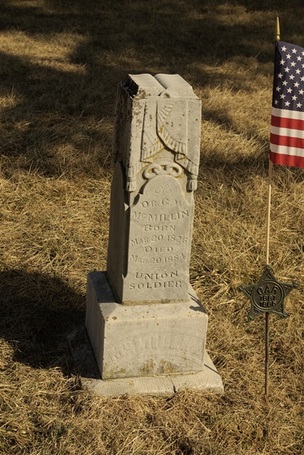 Dr. George W. McMillin.
There is a long-running rumor that a doctor who attended to President Lincoln, on the evening of his assassination, is buried in Hope Cemetery.    Based on research done by the local museum and myself, it is probably true. However, Doctor George McMillin’s importance to the local settlers might have exceeded his part in treating President Lincoln.

By the time Dr. McMillin arrived at Osage Mission in 1869 he had distinguished himself as a physician, a U.S. Cavalry surgeon and contract surgeon-in-charge of the United States General Hospital in Ashland, Kentucky.  Upon his arrival at the Mission Dr. McMillin served the community and settlers with a passion similar to his previous duties. As a leading figure in the Settler's League he spent heavily from his private fortune to gain a favorable resolution to an attempt by the railroads to gain possession of settler's property.  His local legacy is loyalty to our ancestors.

But it was an event on the evening of April 14, 1865 that secured a spot in history for Dr. McMillin. He was among a group of military officers and surgeons in the audience the evening of President Lincoln's assassination. According to Dr. McMillin's obituary in the March 26, 1884 Neosho County Journal:   "...the doctor sprang to a column, up which by the help of some of the officers, he clambered into the box where the president lay, being the first surgeon there, and at once saw and pronounced the wound to be mortal: and then assisted in removing the sufferer from the scene of his martyrdom." (He passed on March 20.)

​There is dispute as to whether it was Dr. McMillin or Army Surgeon Dr. Charles Leale who initially pronounced the wound as fatal. However, research has confirmed that McMillin did arrive at Camp Stoneman (Washington D.C.) approximately four weeks prior to the assassination. His stature as an officer and surgeon makes it likely that he would have been among the doctors present at Ford Theater on that evening.  By all accounts, both McMillin and Leale were only two among a group of surgeons present at the time of Lincolns death.   (See the "... Reference Information:" section below for a published article about the assassination.)
​
Doctor McMillin’s stone is about seventy feet north, northwest of the central flagpole.