​11B. St. Ann’s Academy for Girls
“The schools were something of a mecca in the social life of the people.  Musicales, art exhibitions, and commencement exercises drew larger crowds than the halls could accommodate in the days when entertainment was an art and not a commercial enterprise.”
Beacon on the Plains, Sister Mary Paul Fitzgerald, 1939
Separation of Services.
The transition from the Osage schools to new boarding schools was a more complicated business transaction for the Sisters of Loretto than the Jesuits.  The operation of the Osage Manual Labor Schools, both boys and girls, was under a contract between the United States Government and the Jesuits.  The Jesuits then enlisted the services of the Sisters of Loretto to operate the girl’s school.   Father Schoenmakers had acquired land from the Osages during treaty negotiations, some of which he gave to the Osage Mission Town Company.  As the manual labor school operations wound down, the Loretto’s were on their own without a formal working agreement or assets.  Father Schoenmakers took care of that.

In 1868 a plan for building the St. Ann’s Academy was approved by the Very Reverend Father Coosemans, Provincial, and commenced in 1869.  There were about $16,000 in funds available from the economy of the previous school operations; and $4,000 more were raised during erection of the stone school.  In August of 1870 the sisters took out a charter incorporating St. Ann’s Academy to be conducted by the Sisters of Loretto.  In October of 1870 the trustees of the Academy met and elected four officers: Mother Bridget Hayden (president); Sister Clementine Wall (vice-president); Sister Petronella Van Prater (treasurer) and Sister Vincent White (secretary).  Sister Susan Rudder was also one of the trustees.  In the articles of incorporation the sisters valued their holdings at $20,000.

​On the first of January of 1872 Father Schoenmakers signed a handwritten Document of Separation that deeded 100 acres of land to St. Ann’s Academy and distributed a large amount of livestock, farm equipment, hay, oats, wheat and other materials to St. Ann’s Academy with provisions that some stock would be mutually held until July of the same year.   It also authorized the sisters to occupy the old Mission residence until January of 1873 and established common use of some assets for a time.   The academy also retained the allotment fee for young Osages who remained with the school.  The agreement and Articles of Incorporation provided a smooth transition of separation; and startup of the new academy for the Loretto’s. 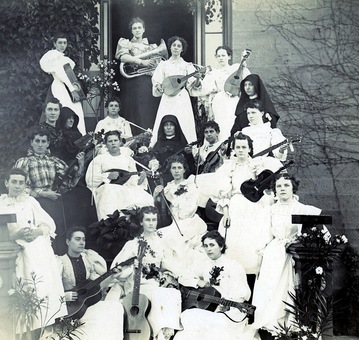 St. Ann's Academy Bijou Club. (Click to enlarge)
The School
The basic curriculum of St. Ann’s Academy was similar to St. Francis Institution.  In addition to Christian Doctrine, the school offered history, geography, mathematics, language, rhetoric, composition, grammar, etc.  To this were added sewing, knitting and housewifery.  But the school’s discriminators were its art and music programs.  The school and teachers were well equipped to teach music with a wide selection of more than forty instruments including piano and a variety of stringed instruments.  The young women were not only taught to play; they were taught to perform with the grace and talent of experienced musicians.  Public piano recitals were offered often.  A group of strings musicians called the “Bijou Club” was organized to provide weekly concerts for the community.  The school also presented frequent art exhibitions and the skill of its artists matched the talents of its young musicians.  St. Ann’s Academy was more than a school—it became the center point of the Osage Mission arts and entertainment community. (See photo information at the bottom of this page.) 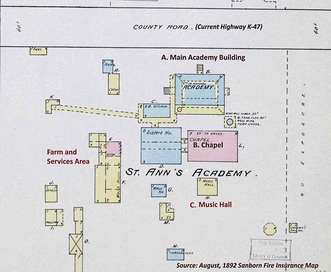 Click to enlarge
The St. Ann’s Academy Campus.
The St. Ann’s campus was larger than St. Francis Institution.  Part of this was by design and part through opportunity.  In addition to schools, the academy also included the farms, livestock, cooking and washing areas for the girl’s school.  Some of the baking and other services for both schools were provided by the academy under a fee agreement.

​It is unfortunate that many photographs and records were destroyed by fire.   But available maps and photos show the school was large and elaborate. 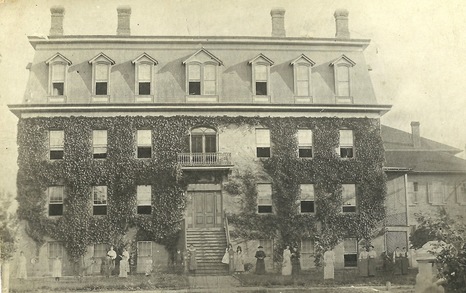 St. Ann's (click to enlarge)
A.  The Main Academy Building.
The original St. Ann’s Academy building was opened for use in September of 1871.  It was a 75’x50’ three story stone structure with a fourth story under a gable roof.

In 1889 the building received a substantial improvement.  The fourth-story gable roof was replaced with a mansard-style roof that greatly increased the dormitory floor space.  The upgrade also accommodated a new water system and other improvements. 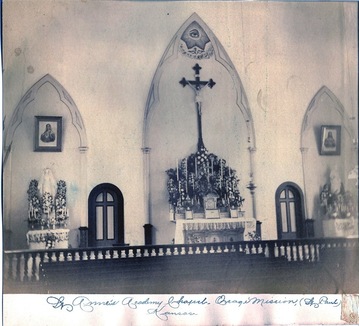 The St. Ann's Chapel (click to enlarge)
B.  The Chapel Building.
In 1877 the corporation moved to build a new chapel building but later abandoned the project because of lack of funds.  In 1887 the project again surfaced and this time an impressive brick structure was erected.  In the words of Graves’ “Life and Times of Mother Bridget”:  “In addition to the numerous auxiliary buildings about the academy there is the Sisters chapel, 40x80 feet, and it is a chapel indeed, neatly, tastily decorated and the altar being finished in a most artistic manner.”  In looking at the photo, that description doesn’t do the chapel justice.  It, in fact, had three altars reminiscent of a scaled down version of the church across the street.
​
The eventual funding source for the chapel is also remarkable.  the money came from one of the Loretto Sisters.  Sister Josephine Fouche Van Prater was born in Havana, Cuba, of French parentage.  Her family was forced to flee Cuba during an insurrection and settled in Perryville, Missouri.  She entered the Loretto order in February of 1842; and little more than five years later arrived at the Catholic Mission with three other Sisters to spend the rest of her life here.    She served an interim position as superior between 1864 and 1867 when she was succeeded by Mother Bridget who had also served in a temporary assignment in Missouri.  During her time in Kansas her family was able to recover much of their family estate in Cuba.  She used a portion of her share of the estate to build the chapel.
C.  The Music Hall.
There are no known photos of the music hall, only the students and teachers.   The decision to build the building was made in September of 1884 at an expense of $2,000.  In “The Life and Times of Mother Bridget” it is described:  “In the rear of the chapel is Music Hall, a neat, compact building filled with musical instruments of all kinds.  Here is taught the piano, the ma, the banjo, etc.—some forty different instruments being used.  To cultivate a taste for good music, and to fit the pupils to appear with ease and grace, frequent “piano recital” recitals are given.” 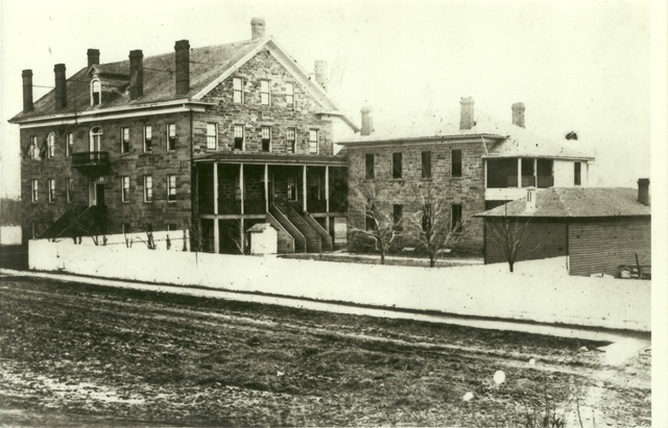 St. Ann's Academy main building before being renovated with a mansard-style roof.
Some Reference Information:Historical information came from several sources including:
Some Photo Information:
There are two photos above (and a couple of others) that are worth some discussion: 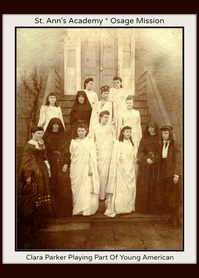 The Clara Parker Photos.
A couple of years ago a gentleman named Joe George sent a couple of the nicest historical photos of St. Ann's we have seen.  One is used in the header, but cropped. These group photos include Mr. George's great grandmother Clara Parker.  (Mr. George is not a member of the St. Paul George family).  Both photos are shown here un-cropped.  The Osage Mission - Neosho County Historical Society is fortunate to have these pictures.

Clara Parker playing the part of Young American is shown at the right (click to enlarge).
Clara Parker * St. Ann's Academy* Sitting 2nd from Right W/Mandolin is below. 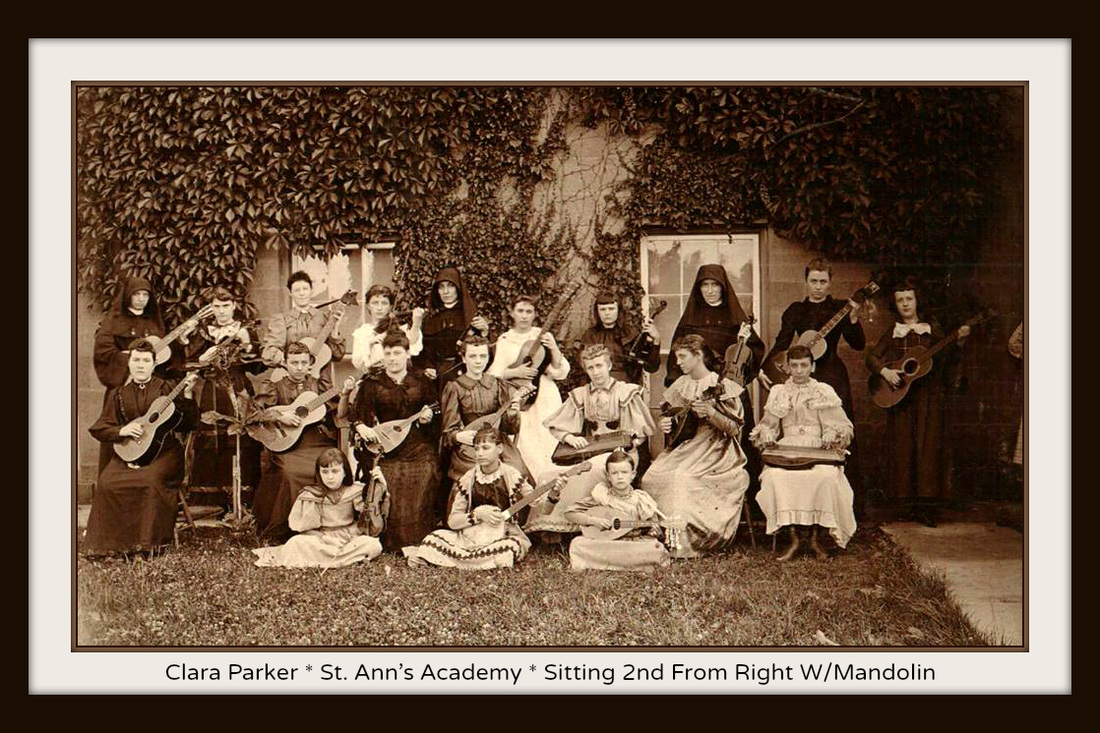 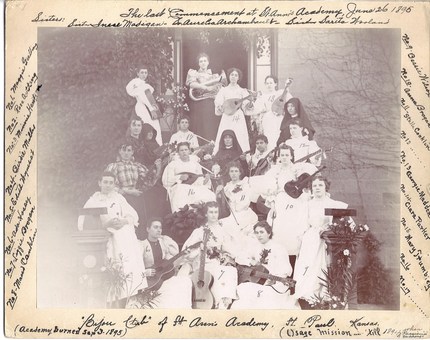 The Bijou Club with names (click to enlarge)
Bijou Club Photos:
We received the photo of the Bijou Club, shown in the upper part of this segment, from the Loretto Archives in 2013.  It was cleaned up from a version that has been on file with the Osage Mission-Neosho County Historical Society for a few years.  The photo from the Loretto Archives is a high-resolution shot that was used to produce a very large print that was displayed in the Archives Museum in Nerinx, KY.  The print was about 5 feet square and hung high on a wall across from the museum's entry—it is one of the first things that catches your eye on entry.  In talking with the museum archivist, Sr. Elanor Craig, there might have been a reason.  "Osage Mission is my favorite mission story."

The version that is in the Osage Mission-Neosho County files is not as clean.  It has numbers written on the girls white dresses (or, unfortunately some faces) that are keyed to names around the border of the photo.  Some of those names are still familiar to St. Paul Residents - like Brogan and Hentzen.  Clara Parker is also in this photo (14).