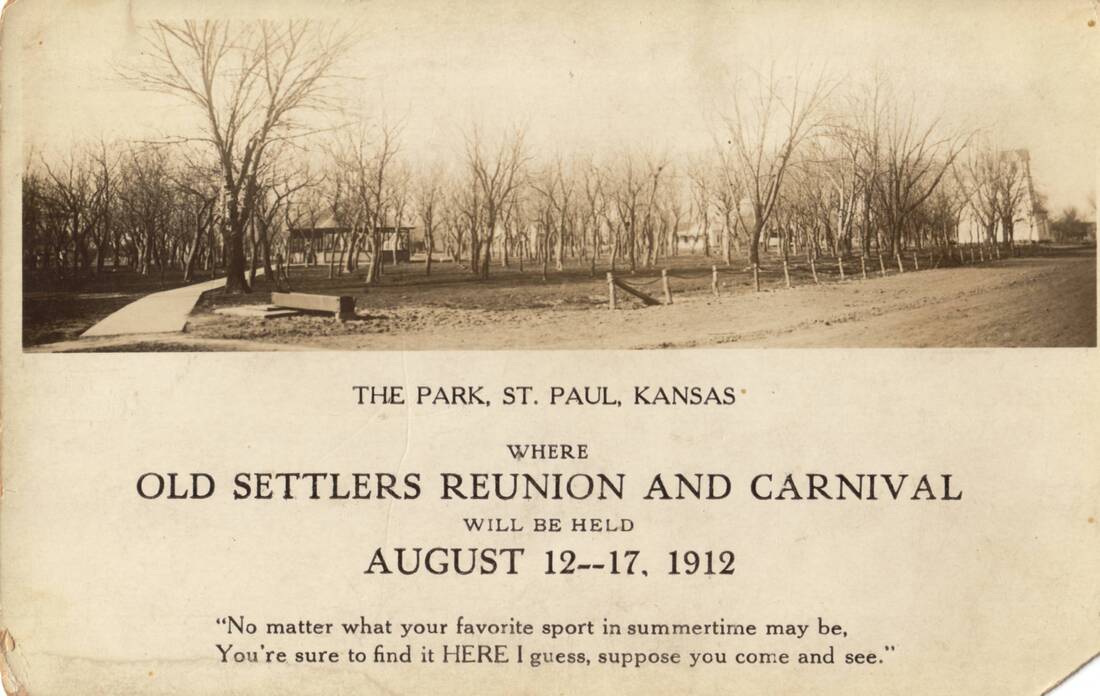 St. Paul City Park in 1912. See comments about the park at the bottom of the page.
Who Knew?  St. Paul's City Park Was Gifted by An Immigrant French Couple.
​When David O’Bryan compiled his book “Annals of St. Paul, The Swan Song of the St. Paul Journal” he commented about an article in the June 22, 1961, issue of the Journal: [1]

​“Nora O’Rourke has a nice article on page 1 of this issue titled, Our Parks.  She writes proudly of our three parks, the City Park, Miles Field, and the newest addition, the roadside park south of St. Francis Church.  She does note that the City Park has never been named and she suggests several good names for the roadside park.  Since the City Park still doesn’t have a name in 2009, we’ll throw in with Nora and propose that area where the city park is located be named Naudier Park in memory of Mr. and Mrs. John B. Naudier who donated that block to the city many years ago.”
​

I will also throw in with Nora and David.  Naming the park after a founding couple would boost our local historic awareness; and give credit where credit is due! *
​John Battiest Naudier was born in France in 1809.  Margaret Naudier was also born in France on May 1, 1815.  It is known that Margaret immigrated to America in 1827 with her parents and located in Clermont County, Pa.  John’s arrival date in America is unknown, but, in 1835, John and Margaret were united in marriage at Frenchville, Pa. by Bishop Kendrick.  They later moved to Illinois and in 1857 started for Kansas bringing with them Durham cattle, fine horses, and machinery with the intention of starting a ranch.

But their move was done during trying times.  When they arrived at Fort Scott, the Kansas-Missouri state line was the center of Bleeding Kansas conflicts between Jayhawkers and pro-slavery border ruffians.  Fort Scott was, at that time, a military base.  Out of caution they took out a claim just north of the fort and were required to flee to the fort several times for protection.
​
In August of 1867, the Naudiers moved to Osage Mission (Now St. Paul).  The move was likely prompted by Father John Schoenmakers who was recruiting several Fort Scott businessmen for this Osage Mission Town Company. [2] John became a part of the town company, acquired some property, and went to work building a part of our town.
John and Margaret immediately began the erection of the Neosho House Hotel. In those early days, materials were not as plentiful as at present and Mr. Naudier had to make his own bricks for the building. It was the first hotel in the city; and for a long time was known as the finest hotel in southeastern Kansas.  The Neosho House was located on the southwest corner of Market and Neosho (Now 5th and Jefferson — presently the home of the Sexton Family; previously Karen Steinbacher). 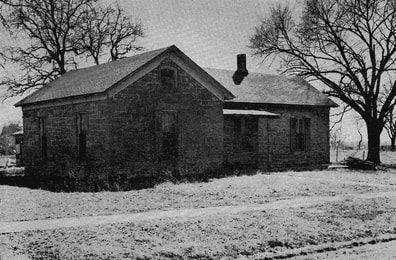 One of the first brick structures in Osage Mission, the Naudier Home was located on the site of Lucky's Guest House, east of town.
​In addition to the hotel, they also built a house near the east edge of town, southeast of the Catholic Church, on land more recently occupied by Lyle Casey (now Lucky’s Guest House).  That home was believed to be the first brick home in Osage Mission – St. Paul.

John Naudier died on Sunday, September 13, 1868, at the Neosho House Hotel, before it was completed.  He was fifty-nine years old, and his obituary said, “his death left a void which can not easily be filled.” [3]  It is believed that just before John’s death the Naudiers donated the block across the street, north of their hotel, to the city as a community commons, or city park. [4]

After John’s death, Margaret finished the Neosho House and operated it quite successfully until 1881 when she sold it to Fred Muller and retired.  Later, the hotel burned.  Margaret Naudier passed away on June 24, 1900 and she is buried next to John in St. Francis Cemetery, St.  Paul. 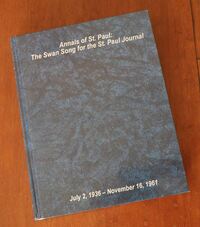 Some Reference Information:
​1.  David’s O'Bryan's Book "Annals of St. Paul, The Swan Song of the St. Paul Journal, 1936 – 1961, copyright 2009," contains selected articles, or abbreviated articles, from the St. Paul Journal during the time in the title.  All of the articles are identified by the Journal issue date and are a direct link to full articles available on microfilm, or on-line sources.  The 516-page book is hard-bound and includes a very detailed 55-page index.  The book is an excellent research resource for anyone doing genealogical or general historic research on St. Paul, Neosho County, or the Southeast Kansas region.  Proceeds from the sale of the book are directed to scholarships for St. Paul School graduates.  Contact David or Jane O’Bryan, St. Paul for purchase — ​obryan.jane@gmail.com.
2.  Father Schoenmakers' town company was composed of Gen. C. W. Blair, Geo. A. Crawford, S. A. Williams, Benjamine McDonald, John Naudier, the Mill Company, and himself.  Father John took some flak from local residents, but he chose men with proven business aptitude who had already invested in the settlement.  Follow THIS LINK for more information about our town’s founding days.

The Naudier Gravestones: John at Right, Margaret Left.
3.  After his death in September of 1868, John Naudier was initially buried in the Old Mission Cemetery which was then located in the area of Miles Field and the residential area just east of that football field.  In 1871, Father Schoenmakers asked families to relocate graves in that cemetery to the new St. Francis Cemetery, or other area Cemeteries such as Hope.  It is not known when John Naudier was moved, but he is noted in several sources as being the first grave in the new St. Francis Cemetery (Ref:  St. Francis Parish Cemetery, St. Paul, Neosho County, Kansas, 1852 ~ 2008, Viola Gouvion).  Both John and Margaret are buried in Block C, in the east part of the cemetery.

​4.  Some accounts say that the park was donated by Mrs. Naudier but credit is generally given to both of them.

Some comments about the very early days of Osage Mission say the streets were ankle-deep dust in dry weather; and deeper in mud when it rained.  It was also said that the new city park was completely devoid of trees.  Clearly, by the time of the 2012 Old Settler's reunion, trees had been planted, but not quite mature.  This photo was taken from the northeast corner of the park looking west.  On the right side, you can see the early Methodist Church.  At left, at the end of the sidewalk, is the old gazebo-band shelter.

* Imagine a two-sided sign at the southeast corner of the park, across from the original Neosho House site.  The street side would say "John & Margaret NAUDIER PARK Est. 1868."  The back would be a simple, interpretive display that would explain who they were.  They were pretty interesting folks!