A Mass of Thanksgiving — April 3, 1977
For those of us who are old enough to remember, the middle 1970s was an anxious period here in St. Paul.  We came close to losing our beautiful and historic Catholic Church building.  St. Francis de Hieronimo Catholic Church has recorded a long, illustrious and somewhat bumpy history.

Crack at the Top of the Thomas Carroll Window Above the Northeast Server's Sacristy Room.
​In the early 1970s Rev. Joachim Gemperline, CP, and parishioners became concerned about a large crack in the wall of the northeast corner of the building.  An attempt was made to pin the crack together with large bolts at the top of the wall.  This repair proved to be futile.

In February of 1974 our new pastor Father Wilfrid Flanery, CP, met with several building consultants, insurance men, a state architect, and the church council.  At that time, it was deemed necessary to close the church, and have Masses on the east side of the Parish Hall until a solution could be found.

What could be done?  Some of the solutions seemed unthinkable. The architect’s assessment revealed that stabilizing the church by pinning it to the bedrock, and redoing the building inside and out, would probably cost more than building a new, modern church.  At that time the church belonged to the Passionists, and they were willing to provide the ground to erect a new church.  Father Flanery had a very difficult decision to make.  But he was aided by an enthusiastic meeting with parishioners and a vote of 80% who favored rebuilding the stone church.

The cost of the stabilization, repair, and renovations would be about $360,000 (Approximately $2,163,475 today).  Where would the money come from?  As it turned out, money came from many sources.  In addition to several large donations, a great deal of money came from donations requested by a letter and postcard campaign aimed at parishioners, previous parishioners, and friends of the church --paper postcards not a Facebook campaign!
​
During the next three years, we attended Mass in the Parish Hall knowing better days would come.  And they did.  On April 3, 1977, Bishop David Maloney of Wichita and our Father Wilfred Flanery celebrated a Mass of Thanksgiving.  We were returning to our home church — and it was spectacularly new and refurbished. Below is the Printed Program from that Mass; and it provides some more details of the building’s history and the construction project.[2]  One point we will make here is that the contractor hired to stabilize the church, Grant Renee & Sons of Kansas City, was the same company that lifted the church and added the basement in 1909.

The Mass Program was published by Henry M. Smith and Judy Rohlfs Diskin.  The copy below can be scrolled using your mouse or a finger.  Page 6 shows some handwritten notes, that were on our copy, that show the timeframes of Jesuit, secular and Passionist leadership of St. Francis.
Some Reference Information.
1.  St. Francis Has Given Us the Benefits of a Long Life — With Some Bumps and a Scar or Two.
The stone church has had a long and interesting story, punctuated with some problems.  Even the initial construction period lasted much longer than anticipated.

1872 – 1884.  When the church construction project was announced by Father Schoenmakers in 1872, the construction time was expected to be about 1-1/2 to 2 years.  But Father didn’t want to burden his flock of mostly immigrant settlers with heavy debt.  The building project was paced by money and took about 12 years.  Follow THIS LINK for Information about the first St. Francis "Church raising." 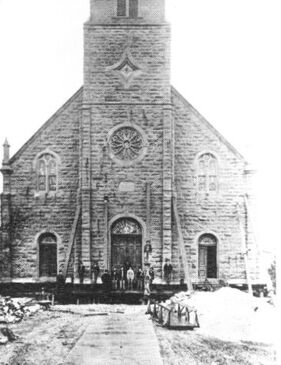 Church Lift and Construction of a New Basement Foundation.
​​1909 – 1911.  When it was determined the original foundation was failing, the parish did the obvious thing.  They replaced the foundation and added a basement — to a 7,000-ton structure!  To do this the parish hired Kansas City foundation contractor, Grant Renee, and Sons to lift the entire building 3 to 4 feet and install a new basement foundation.  In the process, we gained a basement chapel and some office space. (Time since dedicated – 25 years)

1911 – 1913.  The Passionists built a large, three-story monastery that was substantially larger than the church.  The building was attached to the northwest corner of the church requiring the addition of two entrance doors and the replacement of one of the stained-glass windows.  Follow THIS LINK. (Time since the last repair – barely one year)

1920’s. A massive crack developed in the front, west wall and was repaired by a local contractor by pouring a new foundation that tipped the wall back in.  This repair, as described, almost seems miraculous in itself. (Time since last change – about ten years)

1974 – 1976. The extensive stabilization and refurbishment project is described above. (Time since last repair – about 50 years)

1985.  The Passionist Monastery, added in 1913, was razed requiring some reconstruction of the northwest corner of the building and re-filling of the window used for entrance. Some information about that change, and a still-visible scar, can be seen at THIS LINK.  (Time since last change – about 9 years)

2005 – 2008.  The upper bell tower was blown off of the church during a June 30, 2005, thunderstorm.  The original timber frame and a metal-clad steeple was replaced with a modern, structural steel and composite structure that duplicated the appearance of the original steeple, but with more structural integrity.  The repair project was completed in the fall of 2007.  A couple of years later Knights of Columbus Council 760 installed new metal staircases from the choir loft level to the new steeple.  (Time since last change – about 20 years)

When you consider the frequency of significant changes or repairs, it is fair to assume that more problems are coming.  It might be a good time to start thinking about getting this grand old building some historical recognition so it might be eligible for grants or historical preservation funding.

2.​ Thanks to my cousin, Karen Steinbacher, for the copy of the Mass Program.   The Black and White period photos are on file at the Osage Mission-Neosho County Museum.  The color photo of the repaired Thomas Carroll window was taken by Ron Brogan (A Catholic Mission.org).  For more information about that window follow THIS LINK.  Note: The Thomas Carroll window page was part of our Who's Behind the Window project that includes information regarding each of the donated windows in St. Francis Catholic Church.