13. The Mr. and Mrs. Patrick Keating Window.
​It appears as though the Patrick Keating, who arrived in New York, from Limerick, Ireland on April 24th, 1865, is the same Patrick Keating (1836-1924) who married Mary Margarette Mason (1840-1925) in about 1864.  Patrick and Mary spent time residing in Lee's Summit, Missouri, where Pat's occupation is railroad laborer.  At that time the Federal Census shows them without children.  By 1868, they are located in Pettis County Missouri (about 90 miles southwest of Kansas City) when their son Michael is born.  Following are the births of Catherine (1873), Margaret (1878), and Ellen (1880}.  Patrick is listed as a railroad section hand at the nearby Sedalia railhead where the Missouri Pacific MK&T railroads operated.

​The family arrived in Osage Mission sometime before March 10th of 1884 when they purchased one of the larger farms in the area which was located in Township 029s in Range 20.  This section is where one of the earliest Indian Missions was established in Neosho County and Kansas.[2]  The family immediately settled in and occasional news stories mentioned mentioned them with regard to schools, first communions, farming and a short-term, humorous labor strike related to harvest.  Among the news stories was one of the tragic death of fourteen year-old Peter Smith who was killed by a freight train near Walnut, Kansas.  Peter was an orphan who was reared by the Keating's since early childhood.

In 1911 the Keating's sold their farm and relocated to Muskogee, Oklahoma to be closer to a daughter.  However, the relocation wasn't agreeable and they were back in St. Paul in little more than one year.  Here, they established a home within the city but spent time clearing up some legal issues back in Oklahoma.

In 1916 Patrick Keating fell seriously ill and entered the State Hospital in Parsons.  The nature of the long illness is unknown but he would not recover.  He passed at that hospital on June 15, 1924.   Mary Keating's home on Jefferson Street in St. Paul burned in February of 1922 and she returned to Muskogee where she lived with a daughter until her death on December 27, 1925.  Both Patrick and Mary are buried in St. Francis Catholic Cemetery, St. Paul.

Like several other window donors, the Keating family included three women who followed religious vocations:* Sister Alfred became the subject of news articles in 1897 while a novice at Loretta Academy.  She became deathly ill with appendicitis followed by peritonitis.  She remained in agony for several weeks and the Keating family was notified that death was imminent.  However on Thursday night, July 22, 1897 she experienced a remarkable cure and literally climbed out of, and walked away from her death bed.  Whether the recovery was a miraculous cure is difficult to determine but she returned to health quickly.  Sister Alfred did not complete her vows and was married to Andrew H. Fabian in St. Francis Catholic Church on July 5th, 1904.   The manuscript of Who's Behind the Window? includes a detailed description of Sister Alfred's cure including newspaper stories. 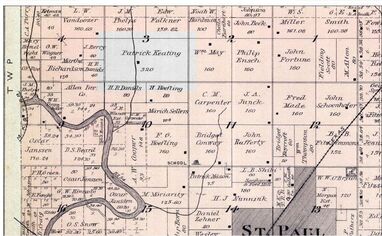 Keating Farm (Click to enlarge)
Some Reference Information.​
1.  The name inscribed on the oval at the base of the Keating Window was misspelled (Keeting).
​
​2.  The Keating farm was located about two miles north and a mile west of Osage Mission - St. Paul.  There they owned 320 acres or 1/2 section.  This section is where the the second Indian Mission established in Kansas was located.  Boudinot Mission was operated from 1830 to 1837.  Boudinot followed, and replaced, Mission Neosho (1824-1829) which was located a few miles north near present Shaw Kansas.  The failure of Mission Neosho was attributed to the volatile relationship its director  had with both the Osage and the white officials.  Follow THIS LINK for more information about the early Protestant missions.  Both of these missions pre-dated Osage Mission by several years. 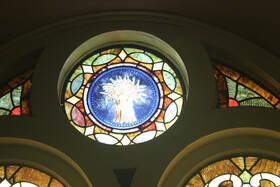 ​3. The Mr. & Mrs. Patrick Keeting stained glass in crowned with the sign of the Wheat Harvest. Which signifies an advancing state of love and charity. As well as Jesus is the Bread of Life.  (Photo - R. Brogan)