18. The Henry M. O'Bryan Window (and the monastery entry scar)..
​Rather than repeat information already at the W.W. O'Bryan window, we will send you there with This LINK.  The glass of Henry's window has a pretty remarkable story itself.

The Monastery Scar, Downsized Window — and Doors?
It appears as though Henry's window was moved during construction of the Passionist Monastery in 1912.    Before I go any further, keep in mind that St. Francis de Heironymo Catholic Church is constructed of large sandstone blocks.  The exterior walls are about 18" to 24" thick — much of that thickness is stone.

When originally installed Henry Miles Obrien's window was installed in the northwest corner of the church, directly opposite the #1 Thomas Carroll Window.  It was one of the 70" wide x 18' tall windows.  In 1912, the Passionists built the monastery and retreat house that was attached to the northwest corner of the church.  At that time, the O'Bryan window was removed and the opening was used for first and second story entrances into the church.  The window was cut down to include the upper 8' 10" and the the shortened window was installed in the south wall of the west sacristy.   Unlike the other windows, the name inscription is on two pieces of clear glass that are hung, with wire, from a lateral window brace.

We know this window was added because a February 27, 1889 photo of Father Ponziglione's Jubilee Mass shows the sacristy door open and no window. So as part of the monastery construction project, the opening was cut in the stone, new footers were installed and the upper window section was installed.   In 1912, this was a fairly laborious project even for skilled stone masons.

But there is another new opening.  A 1912 - '13 photo of the back of the church, taken during construction of the monastery, shows the window has not been installed yet.  But the back door of the church, that we have taken for granted for years, was also missing.  Whether it was added then or later is unknown.  But the stone footer at the bottom of the door is similar to that of the added window.  By anyone's standard the changes to the north end of the church amounted to a pretty ambitious remodel.

When the Passionist Monastery was razed in 1985, Henry Miles' window opening had to be closed.  The stone work isn't quite as uniform as the surrounding wall,  Also, in an upstairs storeroom, above the sacristy, there is a crack in the plaster that shows the shape of the original window.  These reminders aren't as pretty as the rest of the church, but scars are often a little irregular.

2. Religious Vocations and Story Relationships.   It has been noted with other window stories that a large number of religious vocations occurred during the early years of Osage Mission and St. Paul.  Vocations related to the O'Bryan family are numerous:
Also there are a couple of priests discussed in the manuscript that bear pointing out again: 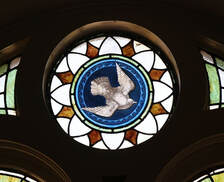 The H.M. O'Bryan Stained Glass Window #18 is graced with the image of the Holy Spirit.  Although doves are mentioned many, many times in the Bible, it is usually associated with the baptism of Christ.  (Photo R. Brogan)