St. Paul, Kansas — 135 Years Ago.
Actually, we were not St. Paul yet.  Father John Schoenmakers’ new town was still named Osage Mission.  Our population was near its peak — and no one was a long-term resident.  A very diverse group of people were working together to build a prosperous and pleasant community.   Our business district expanded to several streets … But, changes were ahead.

The Grist Mill Sat Just East of the Baseball - Track Field on the West Bank of Flat Rock Creek.
​In 1883 our community was best described as a “boom town” and we were a very new town [1] .  Fifteen years earlier, in 1868, Father John Schoenmakers deeded a block of the land he acquired from the Osages to a new Osage Mission Town Company.  A year later, on April 10, 1869, the trustees held their first meeting to begin the process of being incorporated under Kansas Law.  By then much of the town was platted and ready for the flow of settlers cascading across the Missouri border.  Osage Mission was well positioned only twenty nine miles west of that border; plus we already had two necessary elements for a new town — schools and a church [2].  To add even more appeal, Father John's town company was able to quickly acquire a M. K. & T. Railroad connection and a new, state-of-art steam powered flour mill.  The opening of the mill was of great importance because it gave the new town, and surrounding farmers, an impressive economic boost.  ​

No one had been here long.  At that time the population of Osage Mission was about 1,400 [3].  Many of us had relocated from Kentucky, Pennsylvania, New York and other eastern locations hoping for a better life in the free state of Kansas.  Many were immigrants.  Among the settlers were Civil War Union veterans taking advantage of the veteran benefits from the Homestead Act.   Some of those families are still here.  However, some probably came here as builders, completed their work, and then left.  We were about as diverse as we could be but we were determined to do well together.
Osage Mission — 1883
Here is a snapshot of what the main business area of Osage Mission looked like in the early 1880’s.  The illustration is a March, 1885, Sanborn Fire Insurance Map [5].  The list of businesses is from the January 4, 1882 Neosho County Journal.  The list of “Other Business Entities” is of businesses on file (but inactive) with the Kansas Secretary of State Office.

Click on the map to open a sharper, enlargeable map without color captions. [5] 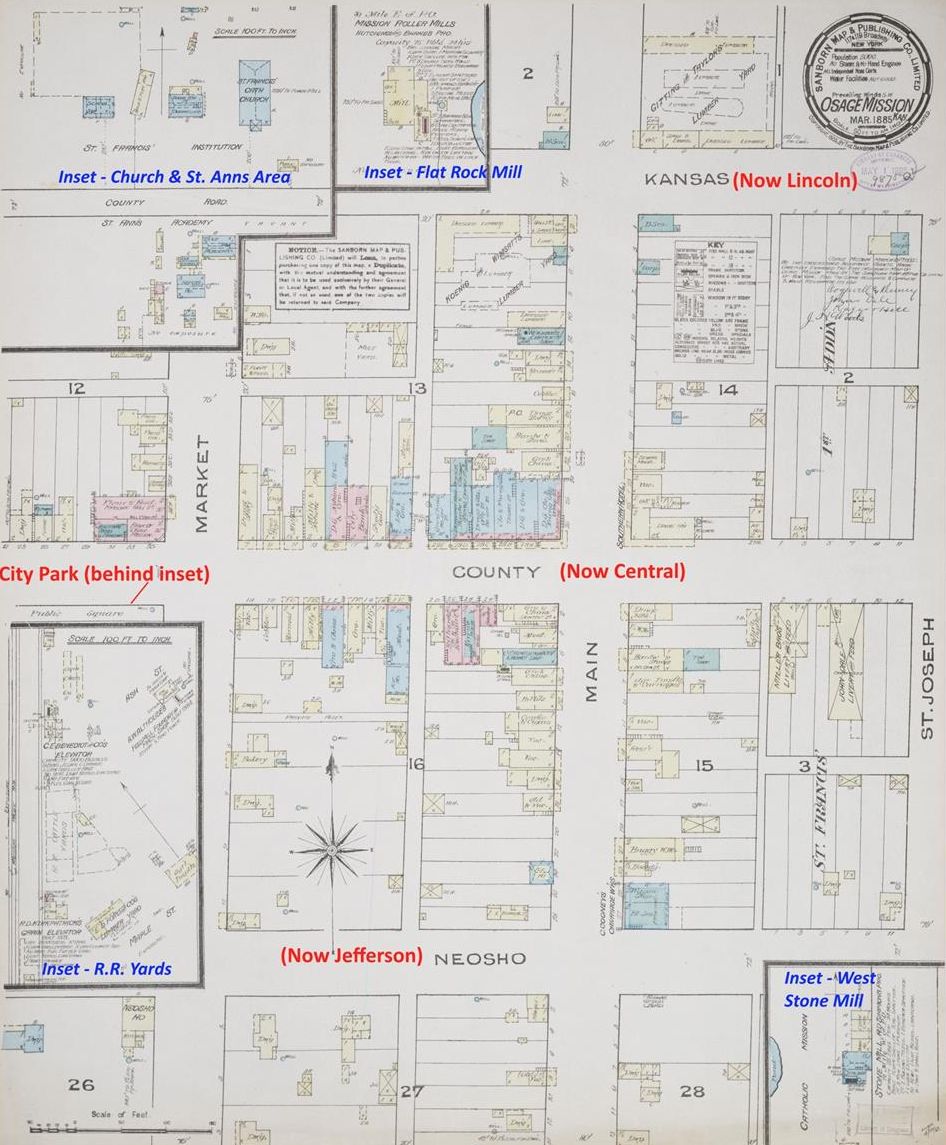 Notice the Hotels at the Corners of Central and Main and Market and Jefferson. 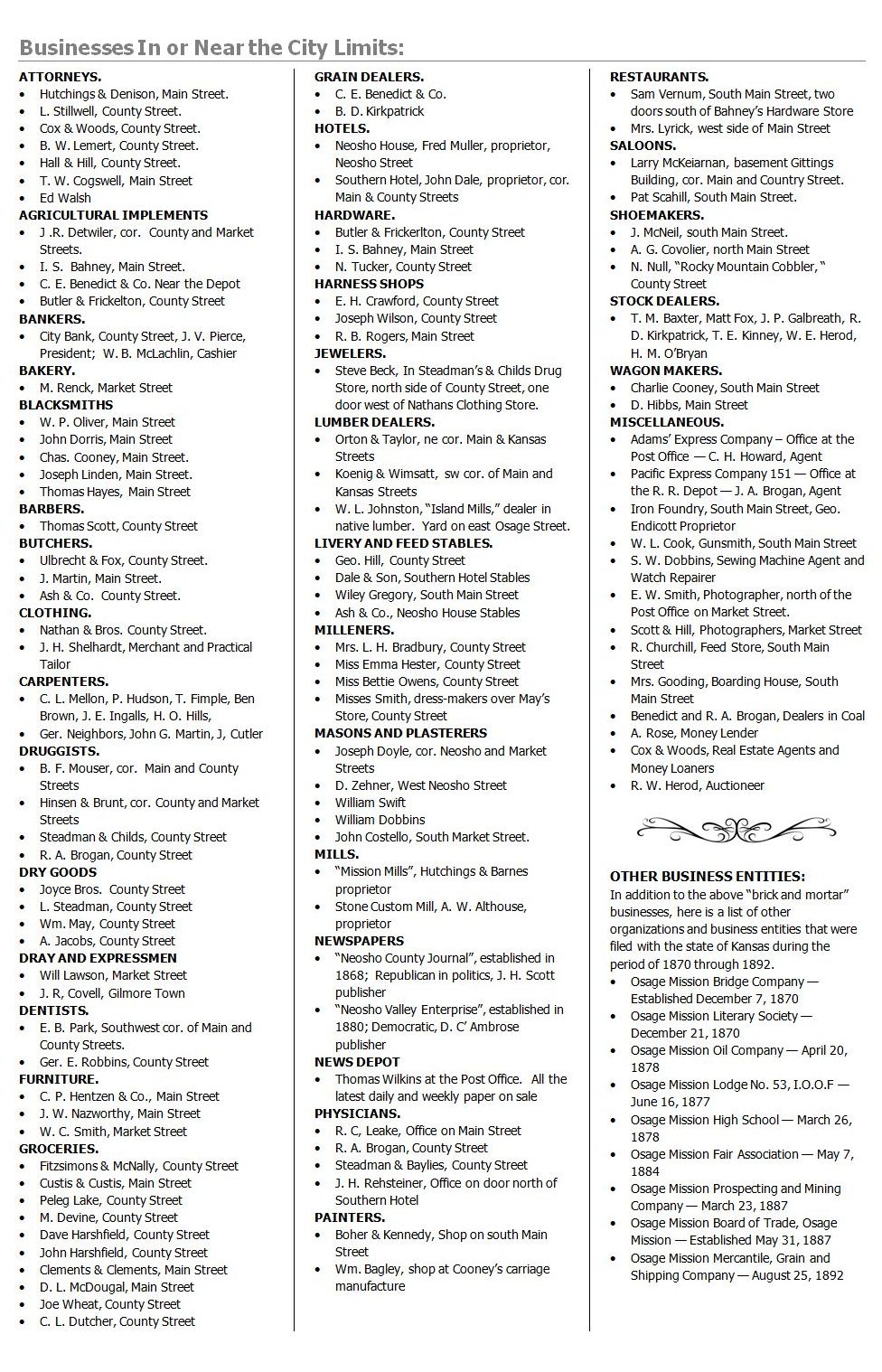 There were probably more businesses during the early 1800's, but these are the ones listed in the newspaper article and in the current Kansas Secretary of State Business Entity Database under search key “Osage Mission.”  By now it should be clear that our town was a pretty dynamic small community.  We had a team of newcomers who were determined to work together and shape Osage Mission into a successful enterprise.  They did it well!
If you would like a three-dimensional view of our downtown area, in the same general time frame, drop by the museum in St. Paul and take a look at A.J. Goodsel's scale model.  It is impressive to say the very least!

Completion of the Church Reduced the Need for Many Specialized Building Skills
So … What Happened?
From the early 1880’s the population started to dwindle toward its current level of 600 [7].  During the 20th century we saw three upward bumps with a significant jump of about 130 during the 1960’s.   Trying to cover 135 years is beyond the scope of this page, but here are some factors that likely affected the period of 1880 – 1900:

Boom Town.
“Boom” is a sudden event.   The first fifteen years of our existence saw a huge surge in construction; some of which was unusual for frontier startups.    In addition to businesses, homes and public schools; the Jesuits and Loretto’s built two large boarding schools.  St. Ann’s Academy alone consisted of several large stone buildings.  St. Francis Institution, plus the original Jesuit monastery, also featured imposing stone and frame structures.   Those buildings required the services of specialized builders and much of the work was finished during the 1870's.  When you look at the number of carpenters, masons and plasterers above, it is not hard to imagine that many specialized tradesmen had already left.  More would leave when the large stone church was dedicated in 1884.  Follow THIS LINK for information about construction of our Catholic Church and subsequent upgrades.  A few of the settlers who departed after 1900 left their names as an indelible record on the windows of the church. 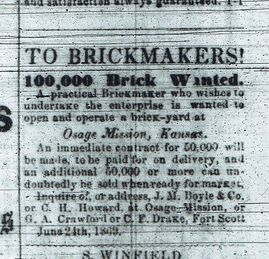 Building Materials Were in Demand!
​A Come & Go Effect.
As noted earlier, Osage Mission was very close to the Missouri state line.  Many of the settlers stopped here first because we offered good schools and some security.  We know quite a few moved on later.  During the period of 2009 through 2012 alone I am aware of people from Canada, California and New York who visited the local museum with the purpose of doing family research.  Their ancestors had been here for a while and then relocated.

Loss of the Jesuit and Loretto Presence and Schools.
1890 to 1895 was a painful transition period.   The Jesuits closed St. Francis Institution in 1891, and left the following year.  In September of 1895, St. Ann’s was destroyed by fire and the Loretto’s left shortly afterwards.  In July of ’95 a very controversial name change — Osage Mission to St. Paul — became effective.  The loss of the schools and staff had a negative impact on the local economy and population.  Some people might have been disgruntled.  Follow THIS LINK for more information.

There are probably other factors and we would be interested in opinions.
Some Reference Information:
1.  The timing information for this article is from three sources:  1) An article from the January 4, 1882 Neosho County Journal;  2) The banner photo is believed to have been taken in 1884;  3) The Sanborn Map is from March of 1885.  For simplicity we rounded to 1883.   Background information comes from several sources, and many are listed in the "Some Reference Information" sections at the bottom of pages linked herein.

2.  For more information about the founding of Father Schoenmakers “mission town” follow THIS LINK.  It is also noted that the Jesuits and Lorettos started the original Catholic Osage Mission, as a government facility, twenty-one years before the town company was formed.

4.  When Father Schoenmakers founded his “mission town” he called it Osage Mission, in recognition of the government “Catholic Osage Mission” that the Jesuits and Loretto’s ran for several years.  During the early 1880’s some local businessmen began a campaign to rename the town.  They didn’t believe the original name represented a vibrant, business community.  On July 1, 1895, the decision to change the name to St. Paul was formalized but it was very controversial.  Follow THIS LINK for more information about a tumultuous period of transition.

5.  The Sanborn Fire Insurance maps are invaluable for historic research because they freeze the configuration of many communities at certain dates.  The maps are drawn to scale and they provide a measurable scale to estimate sizes of lots and buildings.  They are also color coded to indicate the materials used to build individual structures (Ex. blue = stone, red = brick, yellow = wood frame.  Combinations can show red brick on a yellow wood frame building).  The Spencer Research Library at the University of Kansas has recently made many of the maps available on-line at:   https://lib.ku.edu/sanborn-maps 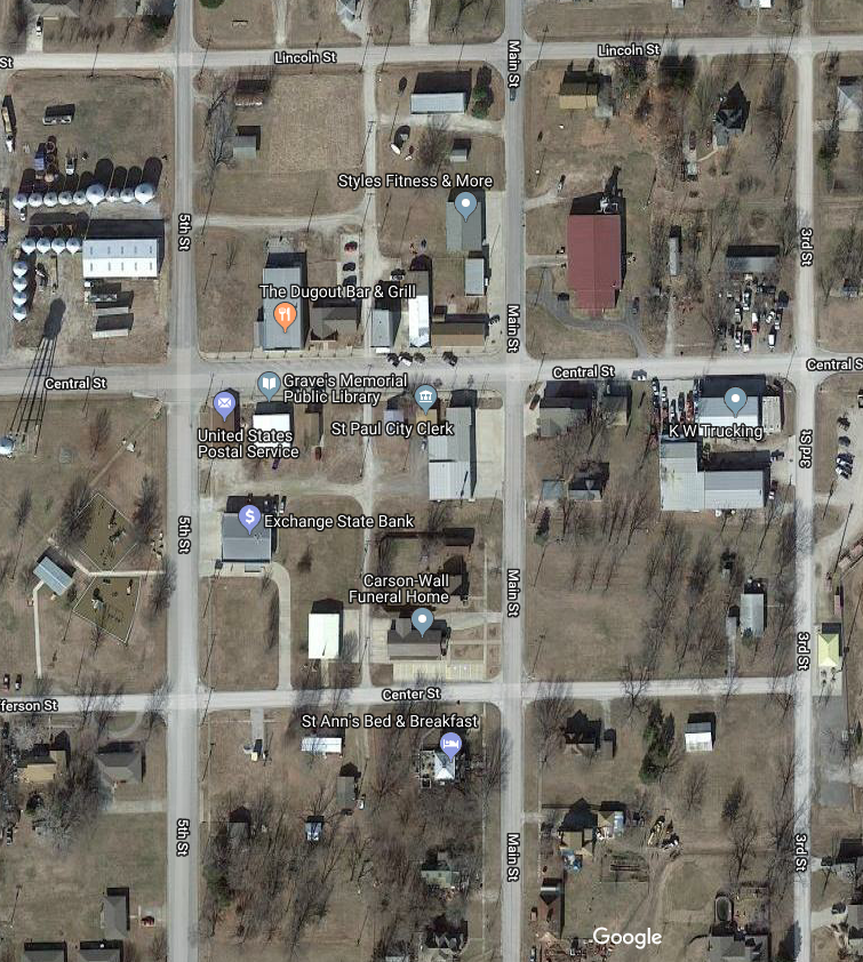 7.  Current Population.  I recall when we moved back to St. Paul, in 2008, the County Clerk told us St. Paul's population, at the time, was about 597.  That was a surprise because we were thinking in the 700 - 800 range.   If you do ten Google searches for our population you are likely to get ten figures in the 595 yo 620 range but here is what City Data says: