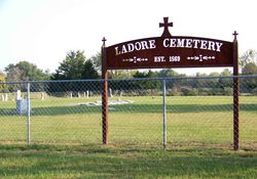 A well-kept cemetery and the name of the Ladore Township are the only reminders of the town's short, turbulent life.
THE ROUGH & TUMBLE TOWN OF LADORE. [1]
Some think of ghost towns as communities that were founded, grew and then slowly declined over decades.  That did happen, but there were some in Neosho County that grew to prominence and died quickly—a couple with infamous histories.  One of those was Ladore, in extreme south-central Neosho County.  Ladore barely lasted three years but it became a national news story during its short life-span. 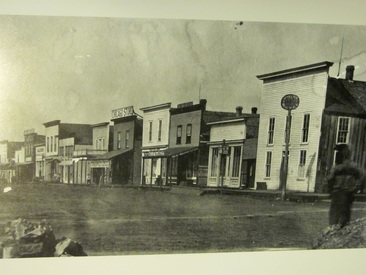 Some of the buildings in Parsons' new business district were moved there from Ladore.
The reasons for Ladore’s founding and short life were probably the railroads, greed and some faulty assumptions. Its founder, a colorful character named James Roach, was a native Virginian who spent several years in Indiana before migrating to Kansas Territory in about 1857.  He had a checkered reputation as a political activist and an inn-keeper and tavern owner in Fort Scott.  He is said to have been a friend of John Brown.  He was also regarded as something of a founding father of the town of Fort Scott since part of the town was built on his land.  His Fort Scott business was known by the names “Roach House” and “Fort Roach” and the latter stuck to him as a nickname.  Roach House was known for rowdy parties that lasted for days and often resulted in bullet holes.  This included one incident when Roach’s son-in-law shot and killed another man during a drunken argument.  James Roach’s past might explain some of what happened in Ladore.

Sometime in 1867 or ’68 the Roach’s sold their interests in Fort Scott and acquired land near the banks of Labette Creek in southern Neosho County.  The reasons for locating there are not known but Roach did have a nose for business and his land was very near the MK&T railroad right-of way.  Shortly after their arrival a settlement was formed.  In short order the settlement began to grow in size and population and the reason seems to be assurances that the MK&T was committed to build their station, roundhouse and maintenance yards in the new town of Ladore.

Ladore’s growth was explosive.  Articles in the Osage Mission Journal and other papers reported new businesses, a school, and churches.  In 1868 Osage Mission missionary Philip Colleton established a mission station at Ladore and a church was built within a year.  A town was platted and the business section was soon populated with frame and brick buildings.  Ladore’s population estimates ranged from 900 to as many as 1,500 people.  The new “railroad” town was on its way and James “Fort” Roach was a mover-and-shaker.

But being part of a new railroad site came with problems.  Some of the rail workers were a little rough around the edges; and some were downright unpleasant. Some probably used the transient lifestyle to stay ahead of the law. Robberies and burglaries increased.  Some folks were reported to have been “shaken-down” in broad daylight and relived of their cash and valuables on Main Street.  Ladore developed a reputation for being one of the meanest towns in Kansas.   But the honest citizens looked on the situation as a temporary inconvenience until the MK&T got itself established.  They were willing to turn their eyes away—for a while.

On May 10, 1870 pacifism clashed with reality.   Early that morning word spread of the atrocity that occurred the evening before.   About fourteen members of a drunken gang roughed up and robbed several citizens.  Then at least seven of them invaded the Roach residence, beat James Roach nearly to death, abducted two young women from the home and took them to an area near Labette Creek.  During the night the gang leader murdered one of the other thugs.  The two girls were able to slip away and alert townsfolk.

On the morning of the 10th a vigilante group of about 300 people rounded up three of the six men in or near Ladore.  Three more were apprehended on the road to Osage Mission.  All six men were brought before the girls who identified five of them.  One-by-one each of the five was hung from the same limb of a large hackberry tree on the banks of Labette Creek.  The sixth person was turned over to local authorities.  Virtually overnight Ladore converted itself from the meanest little town in Kansas to a community of peace and virtue.

By early autumn of 1870 Ladore was riding as high as it ever would.  There were still brief periods of “wildness” but the locals had taken control of their community.  In fact, Ladore became a center of local political activity.  After the Osage were removed from their reserve in southern Kansas, the settlers and railroads were in ongoing dispute over land ownership in the Osage ceded land.  Ladore became a central point for supporting the settler’s when the Settler’s Protective Association (SPA) was formed.  Things were going so well in Ladore; they had barely noticed an upstart hamlet a few miles south.

Maybe the local land owners jacked up their land prices too much for the railroads.  Maybe the MK&T executives were unhappy with Ladore’s support of the SPA.  Or perhaps the assumptions about Ladore being an MK&T headquarters were flawed from the beginning.  In early winter of 1870 the MK&T announced that their depot, roundhouse and maintenance yards would, in fact, be located in southern Kansas—in Parsons!  Ladore was doomed and many of the local business men and residents wasted little time in turning their backs on their town and heading south.  Many of Ladore’s businesses and homes were jacked up, placed on skids and moved to new locations in Parsons.  Photos of Parsons in the late 1870’s include several structures that were built in Ladore and relocated.   You might say Parsons grew as fast as Ladore shrunk and it used a lot of the Ladore’s parts.

Today, little remains of Ladore.  140 years of agriculture has erased the town-site.  All that is left is the neatly kept Ladore Cemetery and its namesake—Ladore Township.  Using current landmarks the town-site was between Lake Parsons and K-59 highway; or about 2-1/2 miles west of the twin cemeteries on K-59 north of the “Parsons overpass.” If things had worked out better for the settlers we might be using the Ladore Walmart today.

Some Reference Information:
[1] If you would like to know more about Ladore, Parsons Historian David Beach published his book “How did the Whiskey go Down at Ladore” in 2014.  David teaches at the Labette County Community College and his book is a well-researched account of Ladore and its founder James “Fort” Roach.  It is available in paperback or Kindle at Amazon.com. [2] In addition to David's book, I borrowed information from a KSU research paper written, in 2010, by student Kristy Mog "The Rough and Gone Town of Ladore, Kansas."  I also researched area newspaper sources and W.W. Graves' "History of Neosho County."

[3] The Woodcut in the header illustration is credited to V.V. Masterson, “The Katy Railroad and the Last Frontier”, University of Missouri Press and the Parsons Sun Newspaper.

[4] A street scene from Parsons, Kansas, 1872.  Credited to Parsons Historical Society.  According to the accompanying article, two buildings on the block were moved from Ladore.
http://parhist.blogspot.com/2013/05/beginnings-mkt-ladore-and-parsons.html