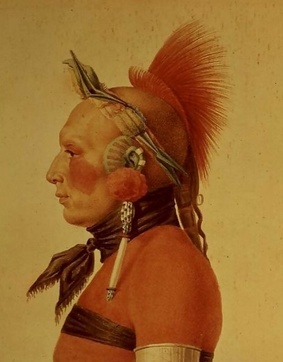 Osage Warrior, Catlin
The Osage, like many of the American tribes, practiced an oral tradition of history until the 19th century.  Prior to being educated in the Osage Mission schools, there was no written language. History was passed along by word of mouth.  This was done by carefully selecting young men who were intensely instructed by tribal elders or medicine men.   The practice introduced inaccuracy and allowed the tribe to erase unpleasant events in their past.

The Osage were among the early Siouan-speaking tribes with possible origins in the Ohio River Valley area of Kentucky and southern Illinois.  There is general consensus that the Osage are descended from the early Cahokian civilization who built their mound city near present day East St. Louis, Ill.    The earliest written history of the Osage dates to the middle 1600’s when they were described by the French.  At that time many had settled into the central Missouri and the northern Arkansas area.

​During the early 18th century a trading relationship developed between the Osage and the French.  The fur business was profitable and the Osage-French alliance matured into friendships and marriages.  The alliance between the Osage and the powerful Chouteau trading family is considered to be a founding force of the City of St. Louis (1764). Also, by the end of the 18th century small bands of Osage from Arkansas had migrated into the Neosho and Verdigris River Valleys of what is now southeast Kansas.  At this time the size of the Osage Nation was estimated to be between 5,000 and 8,000 people. 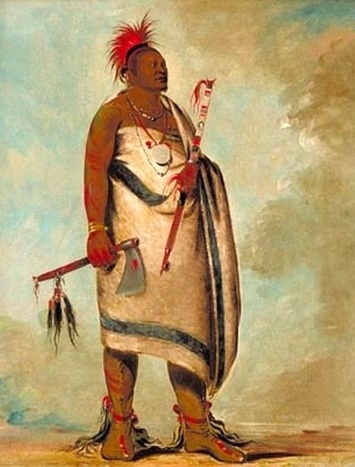 Osage Chief "Black Dog" By Catlin
The early Osage were among the largest in stature among the North American tribes.  19th century painter George Catlin described them as “…the tallest race of men in North America, either red or white skins; there being few indeed of the men at their full growth, who are less than six feet in stature, and very many of them six and a half, and others seven feet.”
​
Osage Mission missionary Father Paul Ponziglione described them:

“Most perfectly built, they each one measure 6 feet in height.  Their appearance is worthy the brush of Raphael.  Their heads are cleanly shaved to their very top, and in the small bunch of hairs left on it, they wear a large bold Eagle Feather, decorated with small red streamers.  All along their scalp, they have a set of stiff bristles standing up like the crest of a helmet.  Long precious wampums hang from their ears, and on their breast, one could see beautiful silver medals of Spanish and French Monarchs, as well as of U.S. Presidents, which their grandfathers had received on the occasions of signing treaties with them.  Their body is bare to the waist, and painted all over with bright colors.  Their arms and wrists are shining with brass and silver bracelets.  Elegant scarves of variegated hues richly embroidered enclose their loins, and their buckskin leggings as well as moccasins are nicely adorned with colored beads.  Finally their herculean limbs are partially wrapped in the folds of an ample red blanket, which they use as a mantel, wearing it with such grace and gravity of mien, as a numedian Chieftan would have done in the days of Fugurtha." 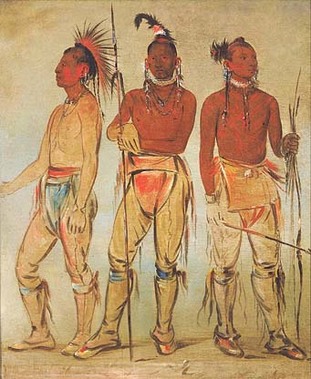 Mun-ne-pús-kee, He Who Is Not Afraid; Ko-ha-túnk-a, Big Crow; and Nah-cóm-ee-shee, Man of the Bed, Three Young Warriors, 1834 Osage/Wa-zha-zhe I-e - By Catlin
The Osages were also recognized as an "uncommonly fierce, courageous, warlike nation" by missionary Isaac McCoy.  As will be noted elsewhere their size and reputation gained them the respect of the government as well as other tribes.

By the turn of the 19th century the Osage Nation claimed much of the land between the Missouri River in Missouri and the Arkansas River in Arkansas, and from the Mississippi west to the peaks of the Rocky Mountains.  The Osages were also considered to be the most formidable military and economic force in Missouri and the eastern edge of the unsettled plains.  They were also recognized as being shrewd negotiators.  Recognizing a need to keep this warlike and politically astute people happy, President Jefferson sent Captain William Clark to Missouri in 1807 to oversee construction of Fort Osage near present Independence, Missouri.    The fort was essentially a fortified trading post and fur processing factory which greatly benefited the Osages trading power in western Missouri.   The economic impact of the Osages and their trading partners, the Chouteau’s, is also considered to a founding force for Kansas City.

Some political perturbations between the France and Spain in the early 1800’s caused the French to temporarily lose trading rights on the Mississippi.  The French and Osage were already looking west, partially because of favorable reports from early Osage in the Neosho and Verdigris regions of northeastern Oklahoma and southeast Kansas.   The French - Osage alliance turned their business interests toward this area.  In about 1815 the Osages began serious migration into southeastern Kansas.  One of the early Chouteau trading posts was near the mouth of Flat Rock Creek just south of present-day St. Paul.  Another was near Little Town or present-day Oswego.

But the events described above came coincident with a series of treaties that resulted in substantial land cessions. Between 1808 and 1825 the Osage gave up their territory in Missouri and Arkansas, settling into a Kansas reserve.  This tract of land was fifty miles wide and extended from 25 miles west of the Missouri line, west to the 100th meridian (approximately Dodge City); with the southern edge being the northern boundary of Indian Territory (Oklahoma).   The 25-mile tract between the eastern edge and the Missouri line was the Cherokee Neutral Lands.

The Osage’s experience with the French and the government gave them a realistic view of the future. They knew the white man’s armies were large; and they had powerful killing machines. They also accepted that the white man’s ways were coming.    Their children would have to receive a white education if they were to prosper.  They were among the first of the tribes to request schools.  From 1820 through 1847 seven missions were established along the Neosho River between northeast Oklahoma and present-day Shaw, Kansas.  An eighth, Harmony Mission, was established just east of the Missouri line northeast of Fort Scott.  All but one of the missions were known as "Protestant" missions; and the Catholic Osage Mission was operated by the Jesuits.  All but Osage Mission failed—its term ended with the Osage removal to present-day Osage County, Oklahoma.

Much of this website deals with the Osages time at the Catholic Mission and that information is not repeated here.   But four important things are noted (follow links for details):
​Go back to Characters - or - go to Story
Some Reference Information:I used several reference sources to compile Osage information for this and other pages on this site.  Much of the information came from: