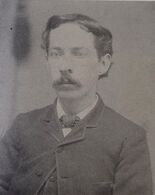 James J. Owens (From Annals of Osage Mission)
The Owens family moved from Kentucky to Missouri in 1869 and two years later they moved to the nearly new town of Osage Mission, where the father engaged in the hotel business  for several years.  James finished his education here and at age of sixteen years he began cutting his teeth in the mercantile business in the store of Leonard Steadman earning $2 per day.  The book Who's Behind the Window, describes a series of changes, business ventures and a partnership with a brother; then the eventual start of the James J. Owens enterprise which eventually included several businesses which comprised both retail establishments and a hotel.
On October 25, 1887 James married Miss Mary Lillian Abell, also a Kentuckian and the daughter of Kentucky parents. Together they had eight children:

James J. Owens passed away on November 21, 1934, his wife Mary Lillian Abell Owens followed on June 30, 1944.  Both are interred at St. Francis Cemetery.  However, the Owens memory and legacy remained in Kansas with son's Ab and Bud Owens until the late days of the 20th century.

*  Owens Family Religious Vocations.   The above is a very brief synopsis of about thirteen pages of manuscript of the book Who's Behind the Window.  The Owens story presented in that book traces family genealogical ties from St. Paul all of the way back to the 1600's Europe.  As with several other donor families, the Owens' had several women who professed to the religious life.  However one did not complete her vows: 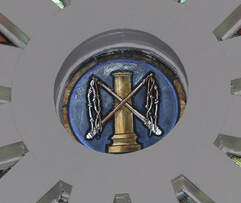 The James Owens and Family window #3 rosette features Jerusalem's scourging pillar and flagellums.  This is a reminder of the price of sin and the Flagellation of Christ that inflicted 5,466 wounds.
​(Photo Ron Brogan)